Store-bought chicken broth has come a long way over the years but I still like to make my own when I have the time. This recipe only takes about an hour and a half from beginning to end which makes time less of a factor when deciding to go store-bought or homemade.  This broth also has the added benefit of providing a fully cooked chicken that can be used for a number of other recipes such as chicken salad, chicken enchiladas or white chicken chili.  A lot of broths cook for so long that the chicken is basically unusable by the time the broth is done but not this broth.  It will yield approximately 20 cups (5 quarts) of broth when you are finished too!  That’s 5 boxes of store-bought broth.  Talk about a money saver.

1 (4-5 pound) whole chicken, neck and giblets removed (I cook the giblets as a treat for the dog. Discard the neck though, chicken bones are very dangerous for dogs.)

1 large onion, cut in quarters – Save yourself the tears and don’t worry about peeling it

4 or 5 sprigs of fresh parsley

1 teaspoon of salt or more depending on your taste preference

Enough water to cover all ingredients and reach about 1 inch away from the top of your stock pot.

Toss everything into your stockpot and fill it nearly to the top with water. You want a little extra room so that it doesn’t boil over and make a mess but you also want to make sure that everything is fully immersed. 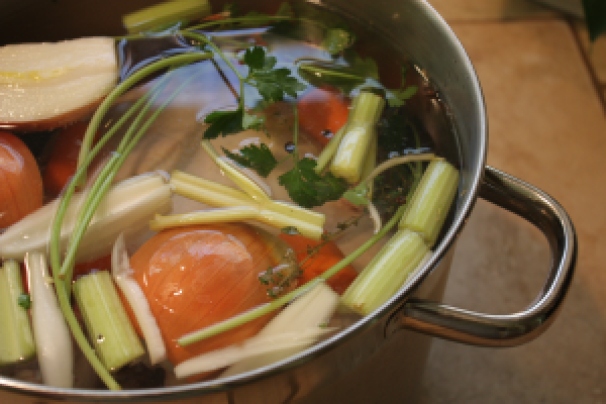 Bring everything to a boil then lower your heat to a gentle simmer. Partially cover the pot and cook until the chicken is done, approximately 45-60 minutes.

Use two large spoons to remove the chicken from the pot and set it on a cutting board to cool.

Place a colander over a large bowl and pour the broth into the colander. Discard all of the vegetables.  Taste your broth at this point and determine if the saltiness is to your liking.  I generally err on the side of a less salty broth and choose to add additional salt if needed to whatever recipe I am using the broth in.  I feel like this gives me greater flexibility with my recipes.  This is one of the reasons I tend to make homemade broth instead of using store-bought although some of the low-sodium store-bought broths are quite good.

At this point I like to put my bowl full of broth into the fridge so that the chicken fat can rise to the top and harden.  After it has hardened I remove and discard it then portion out the broth into 3 to 6 cup glass pyrex dishes and freeze them.  If you are planning to use the broth during the week it can stay refrigerated for 3 to 4 days.

After the chicken has cooled down a bit I remove the meat from the bones and portion it out as well. It is so nice to have cooked chicken on hand for a quick meal.  Freeze what you won’t use in 2 to 3 days.

I almost always double this recipe when making it. Cooking two pots side by side ads a minimal amount of prep time but saves me loads of time the remainder of the month, since I have broth and chicken on hand for busy weeknight meals.

Give this broth a try and let me know what you think. 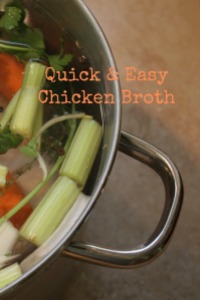 A Penny For Your Thoughts... Cancel reply

Hi there! I'm Ashley but my friends call me Ash. Here you will see me eat, celebrate, explore, create, live, and work. Browse around and check back often. Thanks for visiting! Learn More About Me...

Living on the edge. #canyonlandsnationalpark #isla

It sure feels good to be traveling again! #justwha

It’s been a rough week at the #homeoffice. My as